2020 City of Perth Festival of Sail
Incorporating the

Day 2 was set to be an important day for the onwater team and the competitors. With some delays on Monday, the pressure was on to move swiftly through the races in order to get through the overall tight racing schedule, which is part of the difficulties that the Perth Waters racecourse provides. 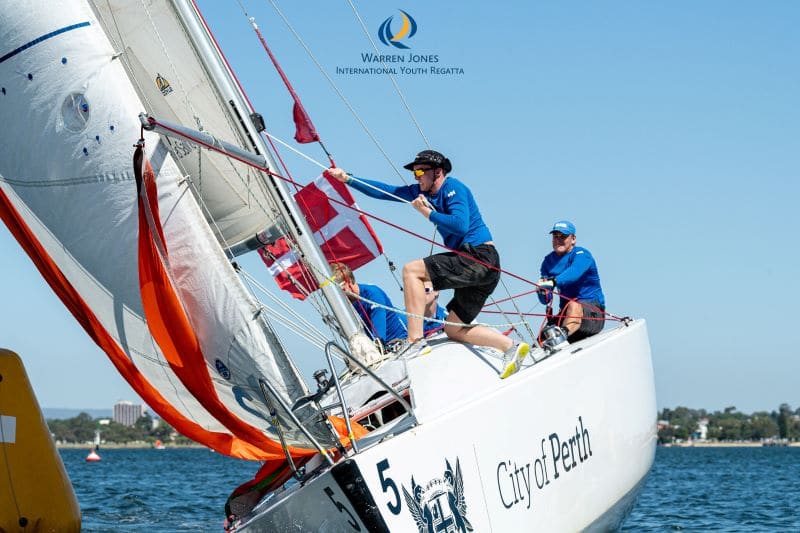 Regatta Chairman, Andy Fethers kept the morning briefing, short, sharp and to the point as time was of the essence. Race Officer, Kim Laurence and his team of Royal Freshwater Bay Yacht Club volunteers were promptly down in Perth Waters setting their course as the competitors and umpires made their way up the Swan River to start racing without delays. The ‘Wind Gods’ as Kim likes to call them, were on our side on Day 2 as the team were able to push hard, ending the day two flights into the second round robin. As Andy likes to say, ‘After we complete the First Round Robin, no matter what happens after that, the Regatta will have a result’ which is a key mark in the week for the Regatta team as the Perth Waters racecourse can historically be unpredictable and inconsistent at the best of times…

The Fremantle Doctor was called and it delivered, providing a sea breeze which was welcomed by all competitors and officials out on the water. The weather was slightly cooler, but still sitting towards 35ºC, but with the sea breeze, it was much more bearable for everyone out on the water. 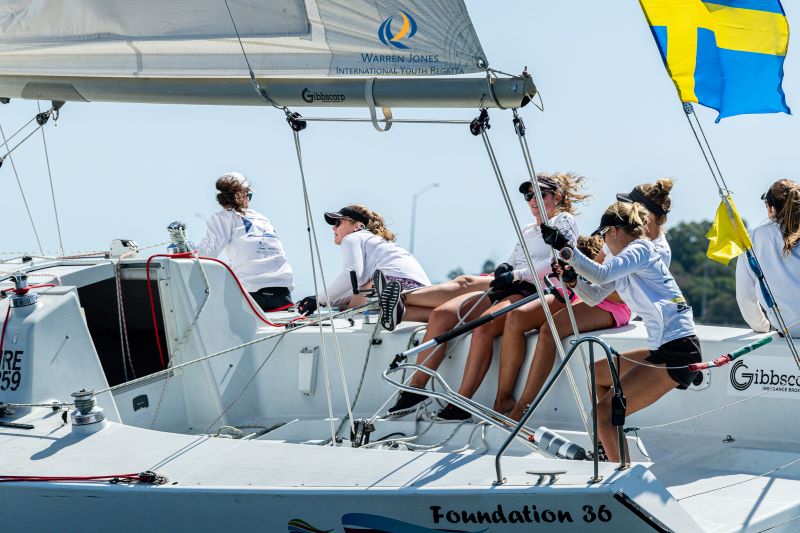 The day brought some great and tense matches between all our competitors, but notably Boulden VS Egnot-Johnson and Grimes VS Price. Today also saw the sailors really push themselves in their racing as they became more comfortable and familiar with the boats. Overall it was an action packed and fast-paced day! 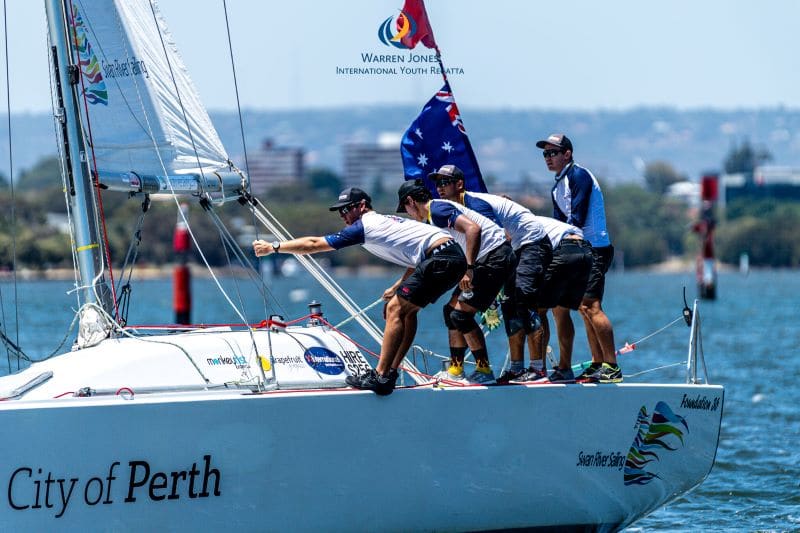 After a big day of racing on Day 2 of the 2020 Warren Jones International Youth Regatta, the teams and officials were able to head ashore into Elizabeth Quay where there was the Official Welcome Function of the 2020 City of Perth Festival of Sail at the Rooftop bar of The Reveley, right by the water, with the perfect view of the racecourse as the sun set. Sponsors, stakeholders and invited guests joined the teams in celebrating the occasion.

The formalities were commenced by Professor Len Collard, who performed a traditional Welcome to Country, especially appreciated by our 6 international travelling competitors and a various international officials.

Mr Andrew Hammond, the Chair of Commissioners from the City of Perth, then gave an address where he welcomed the Festival of Sail back to the City of Perth and gave his support for the various elements that festival provides including the Beach Clean Up, the Womens Networking & Leadership morning and the Free Sailing opportunity to the general public. 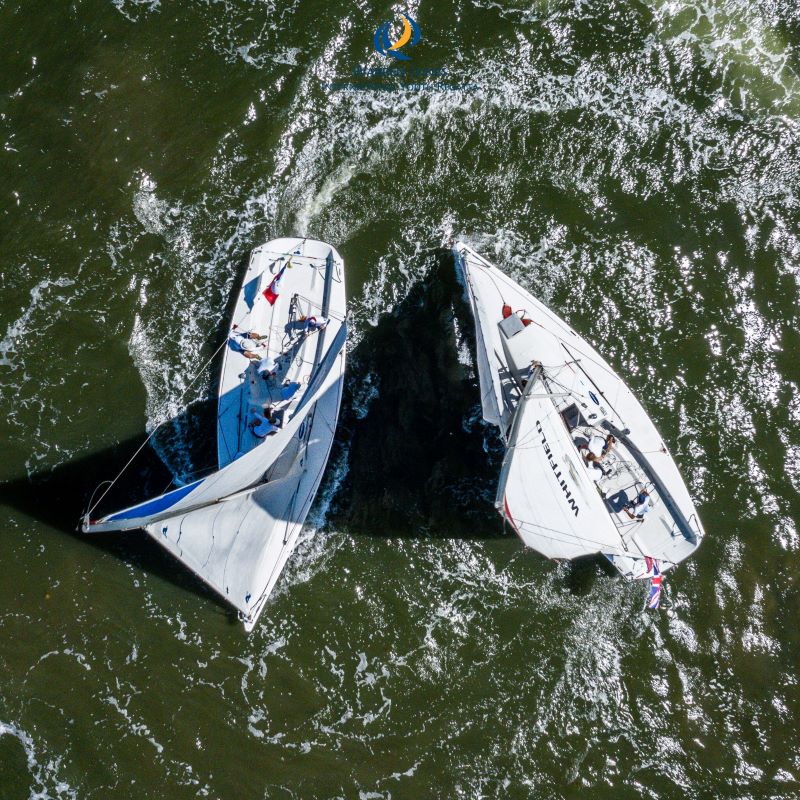 The mic was then passed over to long time Chairman of the Warren Jones Foundation, Ron Packer, who provided thanks to the sponsors, to the Warren Jones Families and to the partner Yacht Club, Royal Perth Yacht Club and, host club, Royal Freshwater Bay Yacht Club for their hard work and support even through the difficulties of hosting the event in Perth Waters that arise.

Commodore Gary McNally from the Royal Freshwater Bay Yacht Club then thanked his team of dedicated volunteers and key staff, including Debbie Blaauw, Sharon Skinner & Chelsea Hall who has been integral behind the scenes. Commodore McNally also provided thanks to those who are kindly hosting travelling teams and officials during their time in Perth; Captain of Sail Barbara-Dene Jones, Vice Commodore Rob Parker and his wife Tracey, Mark and Jane Hannaford, Beth and Graham White, Phil & Rosemary Mostyn and John Low.

Regatta Chairman Andy Fethers then finished the formalities by introducing the teams and highlighting the level of skill across the spread of competitors in 2020. With 9 of the teams being ranked in the top 100 World Sailing Open Match Racing Rankings*, 7 different nationalities and a great mix of male and female participants, it is a line up that the Regatta is extremely proud of especially seeing as many teams come back time and time again to compete in the Warren Jones Regatta. in 2020, there were over 30 Expressions of Interest to compete and the event managers only hope to see this continue to grow again in coming years.

Here is the line up for the 2020 Warren Jones International Youth Regatta; 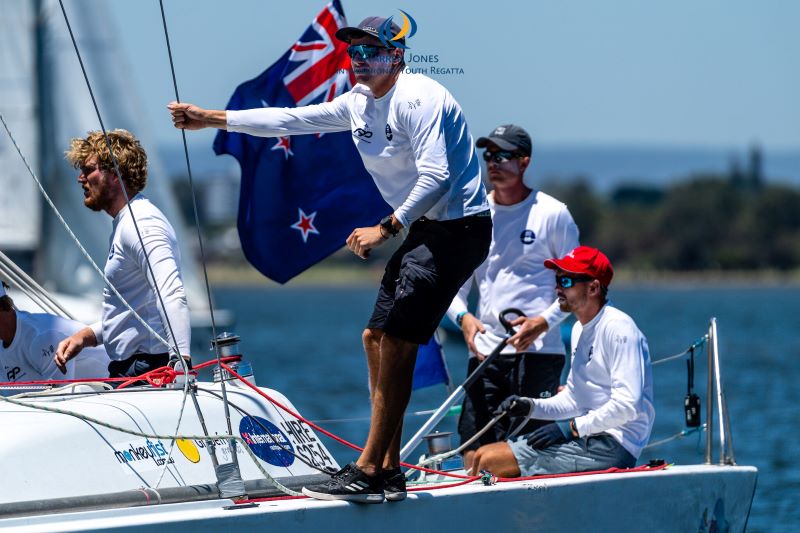 Day 3 of the 2020 Warren Jones Regatta has kicked off with a Beach Clean Up on the foreshore of the racecourse which is supported by competitors, volunteers, sponsors and stakeholders in addition to Keep Australia Beautiful, River Guardians, Cleana Marina & The Department of Biodiversity Conservation and Attractions.

The third day of racing is currently underway with conditions currently looking favourable once again and the onwater team are confident that they are on schedule leading into the remaining days of the Regatta.

This evening, sponsors and local businesses will participate in the Corporate Cup where they head onto the water for a bit of racing in Perth Waters then head back to the Lucky Shag Bar for some hospitality & Networking!

Listen to the Live Broadcast HERE