THE PRICE IS RIGHT!

DAY FOUR OF THE 2018 CITY OF PERTH FESTIVAL OF SAIL

Day four of the 2018 City of Perth Festival of Sail started at 8am at the Lucky Shag – the meeting point for the morning’s Beach Clean Up; organised by Swan River Sailing, the Department of Biodiversity and Keep Australia Beautiful. It was great to see staff, volunteers, sponsors and competitors all turn out to help keep our river’s clean. A trailer load of rubbish was collected and sent to where it belongs – the bin! 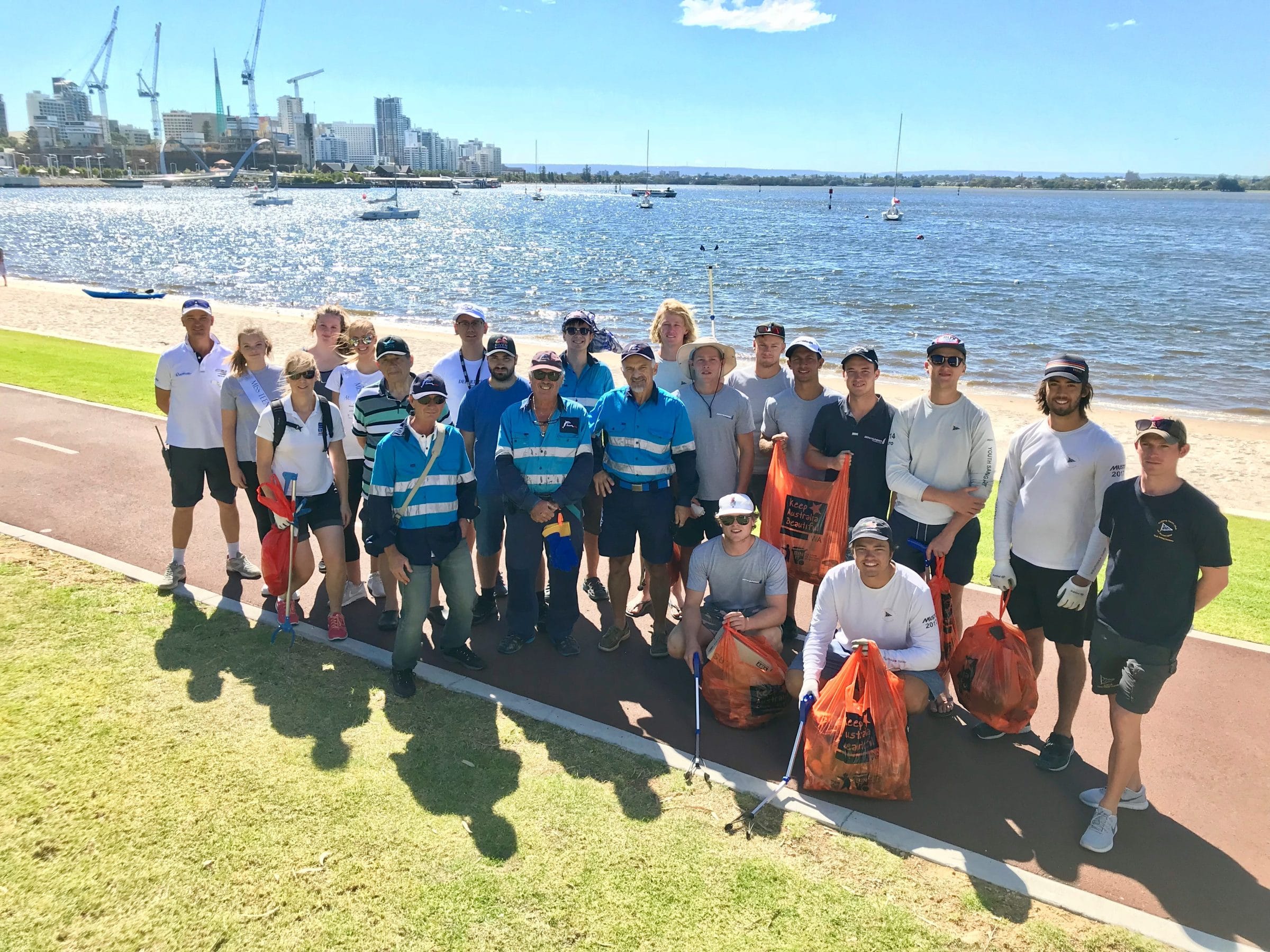 The semi-finalists at the 2018 Warren Jones International Youth Regatta literally came down to the wire in the last two matches of Round Robin 2 as the sun went down over Perth Waters at the end of day four of the 2018 City of Perth Festival of Sail.

It had been yet another really challenging day for PRO Kim Laurence and his race management team with very light and fickle Easterly’s early in the afternoon. Having struggled to get some early Round Robin Two flights going in almost drifting conditions, finally a light sea breeze arrived late afternoon to set up a fitting finale as the skies turned to gold over the city.

Will Boulden and his Alpha Racing Team from Royal Freshwater Bay Yacht Club kept his cool throughout Round Robin Two, only losing one match to his rival from across the Tasman, George Anyon, and another to James Hodgson and his team from the Cruising Yacht Club of Australia. Will finished Round Robin Two with a final race win over Harry Price to record a scoreline of nineteen wins and three losses (86%).

Harry Price and his experienced DownUnder Racing, also representing the Cruising Yacht Club of Australia, pushed Will Boulden all the way but faltered in a key match against the local young gun Marcello Torre.

George Anyon from the Royal New Zealand Yacht Squadron came back with a vengeance in Round Robin Two with the best scoreline of any team (ten wins – one loss). Some excellent racing from him assured that there will be a kiwi team in the semi-finals.

The last final semi-final place also went down to the last flight of the day. Team Dutch Wave all the way from the Netherlands, skippered by Jelmer van Beek, looked to be in the box seat for a place until his chances faded in the dying breeze earlier in the day. He lost a crucial match against Mark Spearman which left him with two tough battles to finish the Round Robin against regatta leaders Will Boulden and Harry Price. Meanwhile local Mark Spearman from Royal Freshwater Bay Yacht Club had been chipping away through his matches leaving a tight situation to decide the final semi-final spot.

Anyon had to beat van Beek in the final flight to allow Mark Spearman’s team to sneak through to the semi’s on a count back, which he did, leaving Team Dutch Wave in fifth place, but it was a very credible effort on their part in their first Warren Jones International Youth Regatta – it is a regatta that is rarely won at the first attempt.

The remaining teams bow out of the competition at the end of Thursday and with the Finals due to take place the following afternoon – the last day of the 2018 City of Perth Festival of Sail. 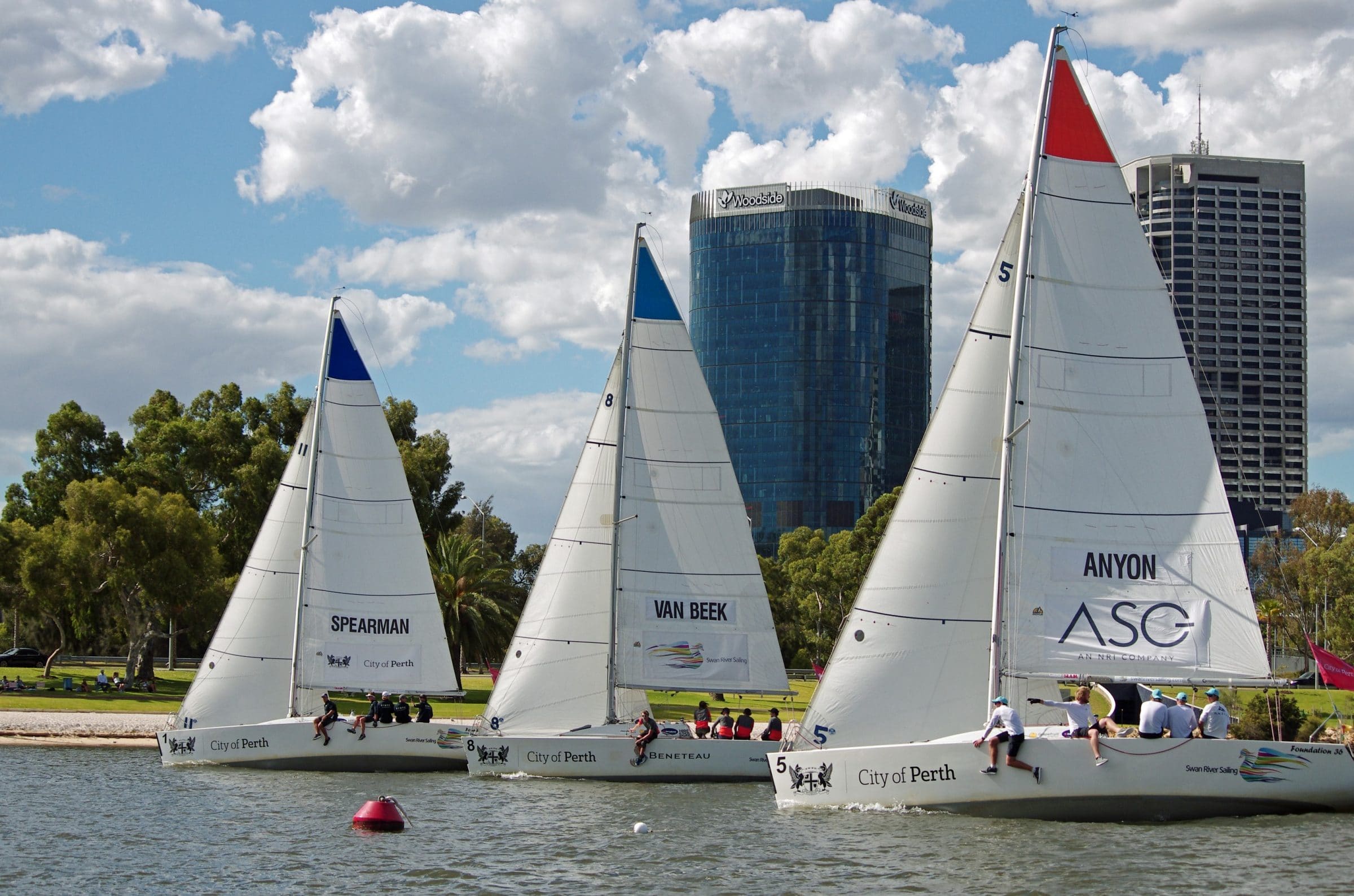 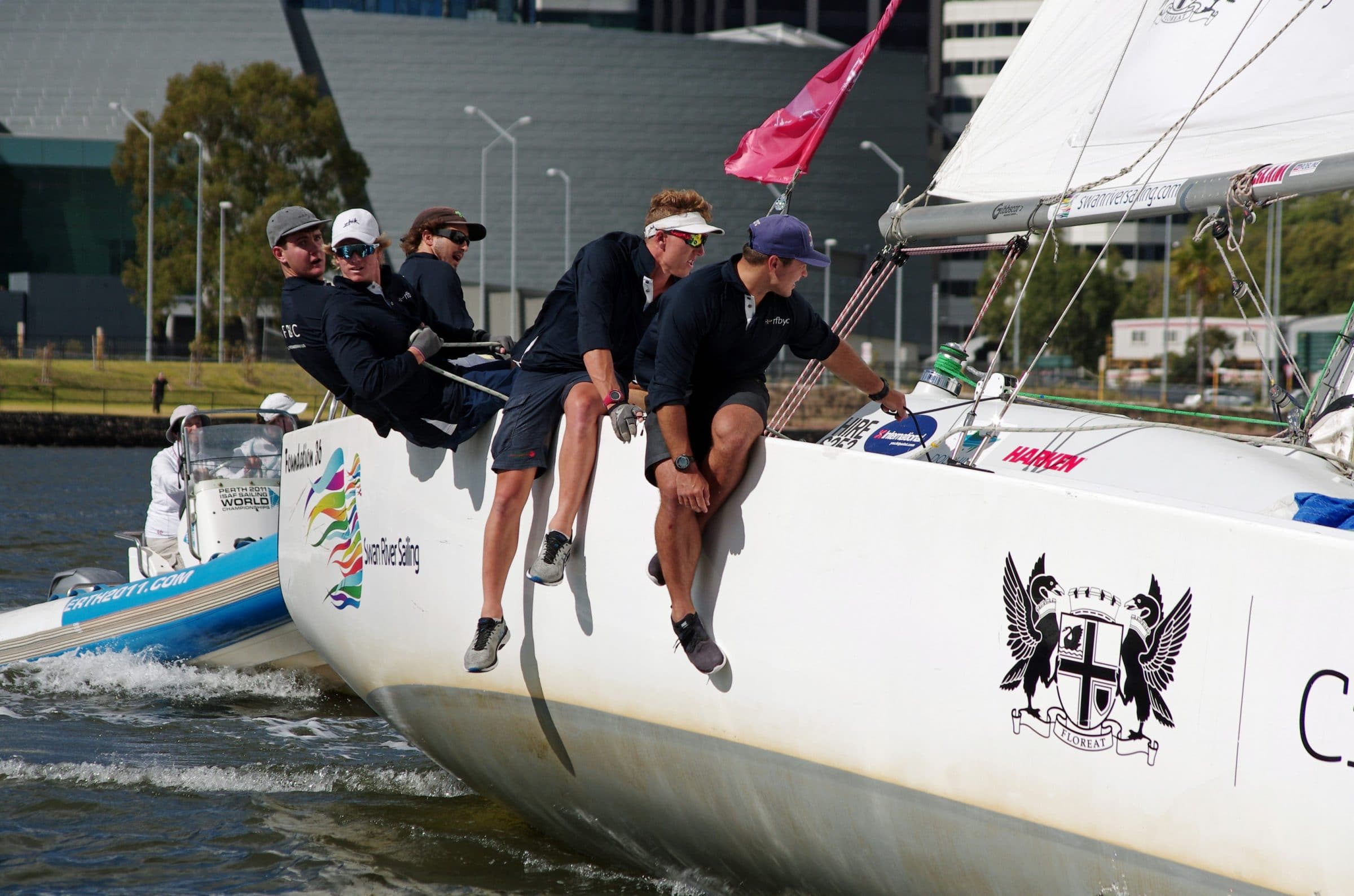 DAY FIVE OF THE 2018 CITY OF PERTH FESTIVAL OF SAIL

Day five of the 2018 City of Perth Festival of Sail began with the major fundraising event of the regatta – the Warren Jones Gala Luncheon. A ballroom full of guests turned out to the event, hosted at Royal Freshwater Bay Yacht Club, by long time supporters, Spices Group.

Leeuwin Estate as always, donated their premium wine to the occasion and Australian Fine Jewellery supplied a host of exquisite pieces for the main and silent auction.

LGFG Fashion House was back again; measuring up guests for a free custom made business shirt, or a pair of cufflinks if they took up the opportunity the year before.

Peter Fitzpartrick AM entertained guests with an interesting speech before guests retired to the lawn to enjoy a grazing board of cheese and petit fours or boarded spectator boats to head to Perth Waters to enjoy the Finals racing! 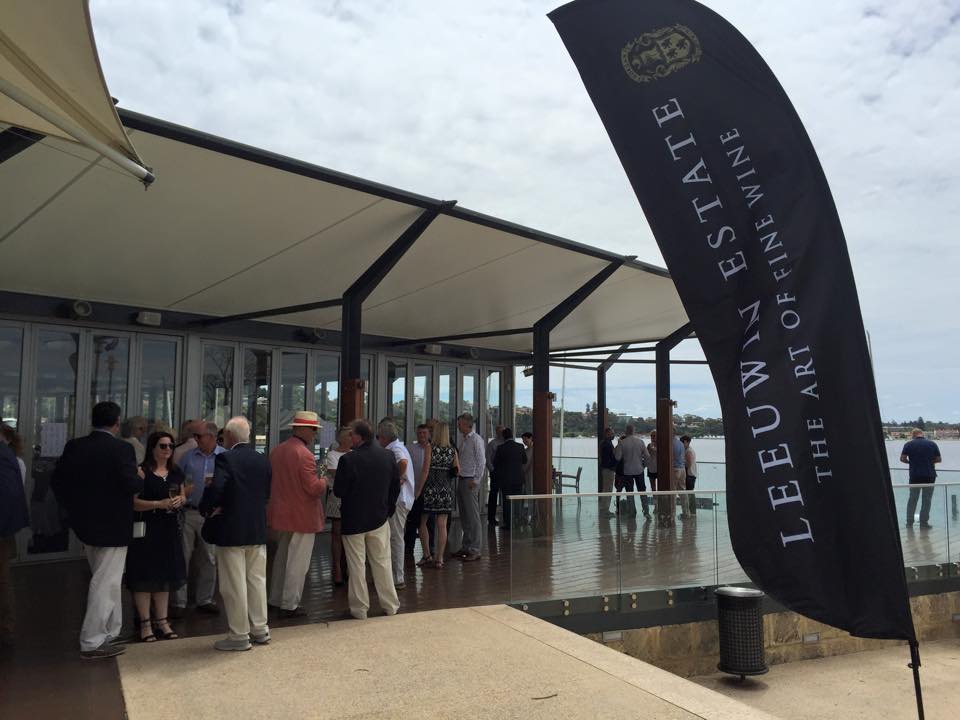 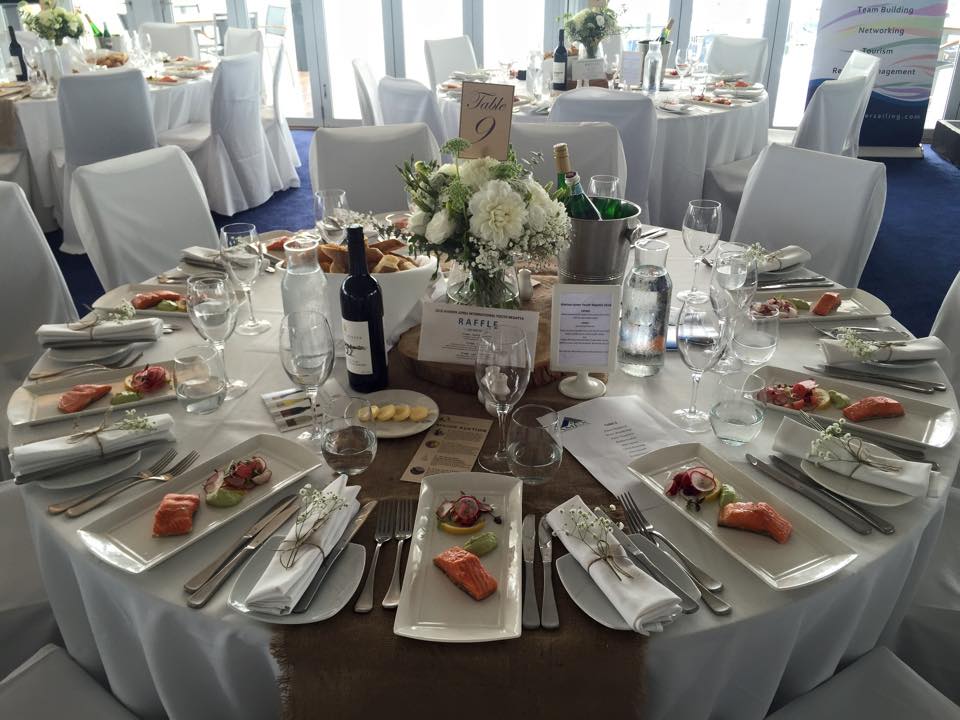 The last day of the 2018 Warren Jones International Youth Regatta started in the same pattern as the whole week with light and flukey Easterly’s delaying any action until mid afternoon on a hot and humid Perth day. The semi-final heats were shortened accordingly to the best of two matches.

As winner of Round Robin two, Boulden chose to race fellow clubmate Spearman. Boulden’s team won both matches in a very light Easterly breeze. Price and Anyon battled it out for the last spot in the final, with Price coming off on top.

Before the final matches the breeze took a big shift to the S/SW and increased to a more acceptable 8 – 10 knots, much to the relief of a big fleet of spectators and support boats surrounding the short stadium type course in Perth Waters. The Finals were also shortened to the first to two points as the light started to fade in the late afternoon of the final day of the 2018 City of Perth Festival of Sail.

The Grand Final was set up for a race off between the highest ranked teams at this year’s Warren Jones International Youth Regatta. From the entry into the start box in flight one, Harry Price and his team hunted his opponent but copped a penalty in the process, which put him on the back foot. However Price manoeuvred his boat into a much better position at the start and led Will Boulden up the course. In the short two lap course Price extended on each leg and was easily able to off load his penalty and go on to win by three boat lengths.

On match point, Harry Price again got penalised in the pre-start giving Will Boulden a glimpse of a come-back. However, Price and his DownUnder Racing team finished the regatta off as per the previous race – winning the 2018 Warren Jones International Youth Regatta as part of the City of Perth Festival of Sail! 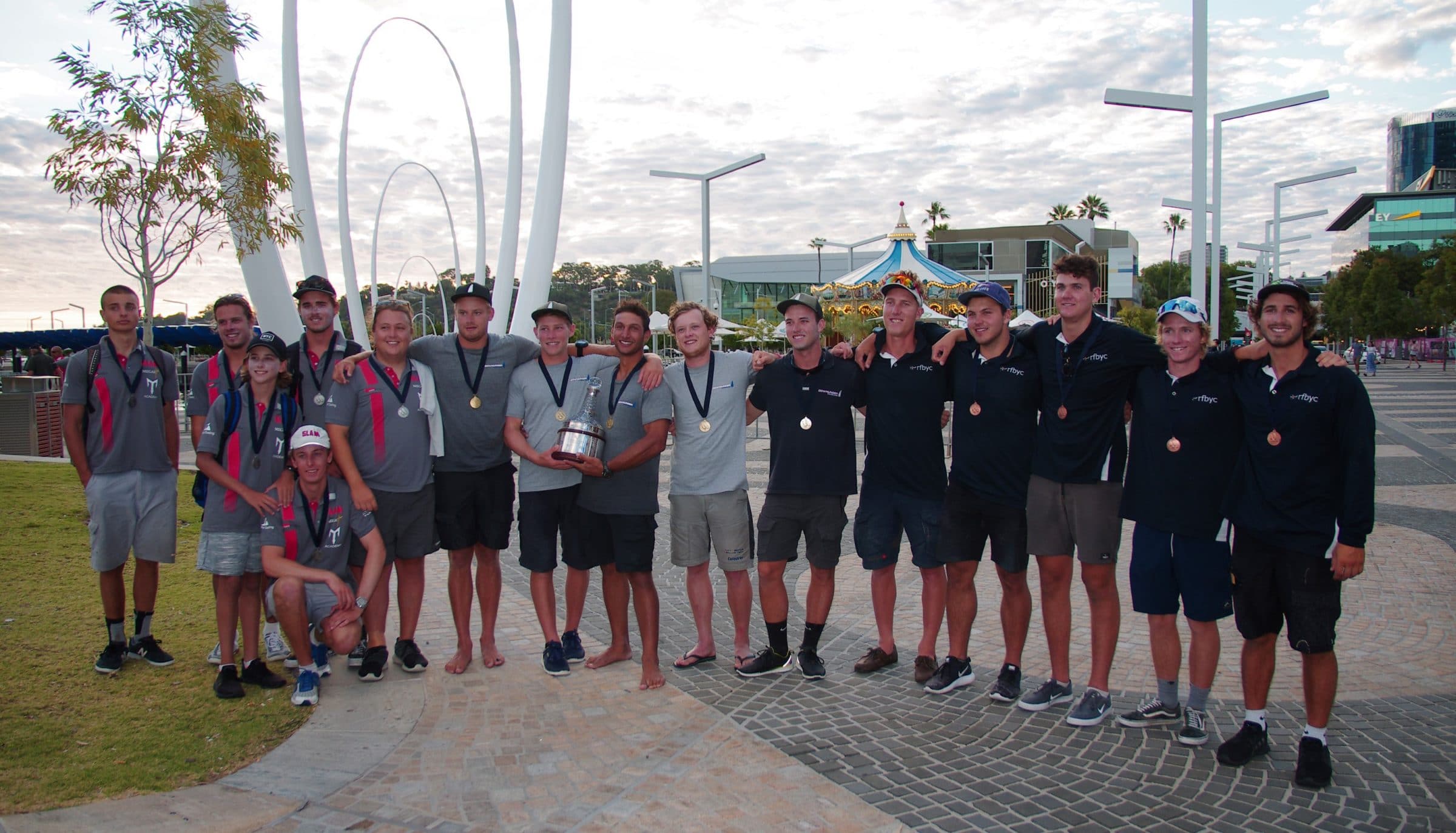 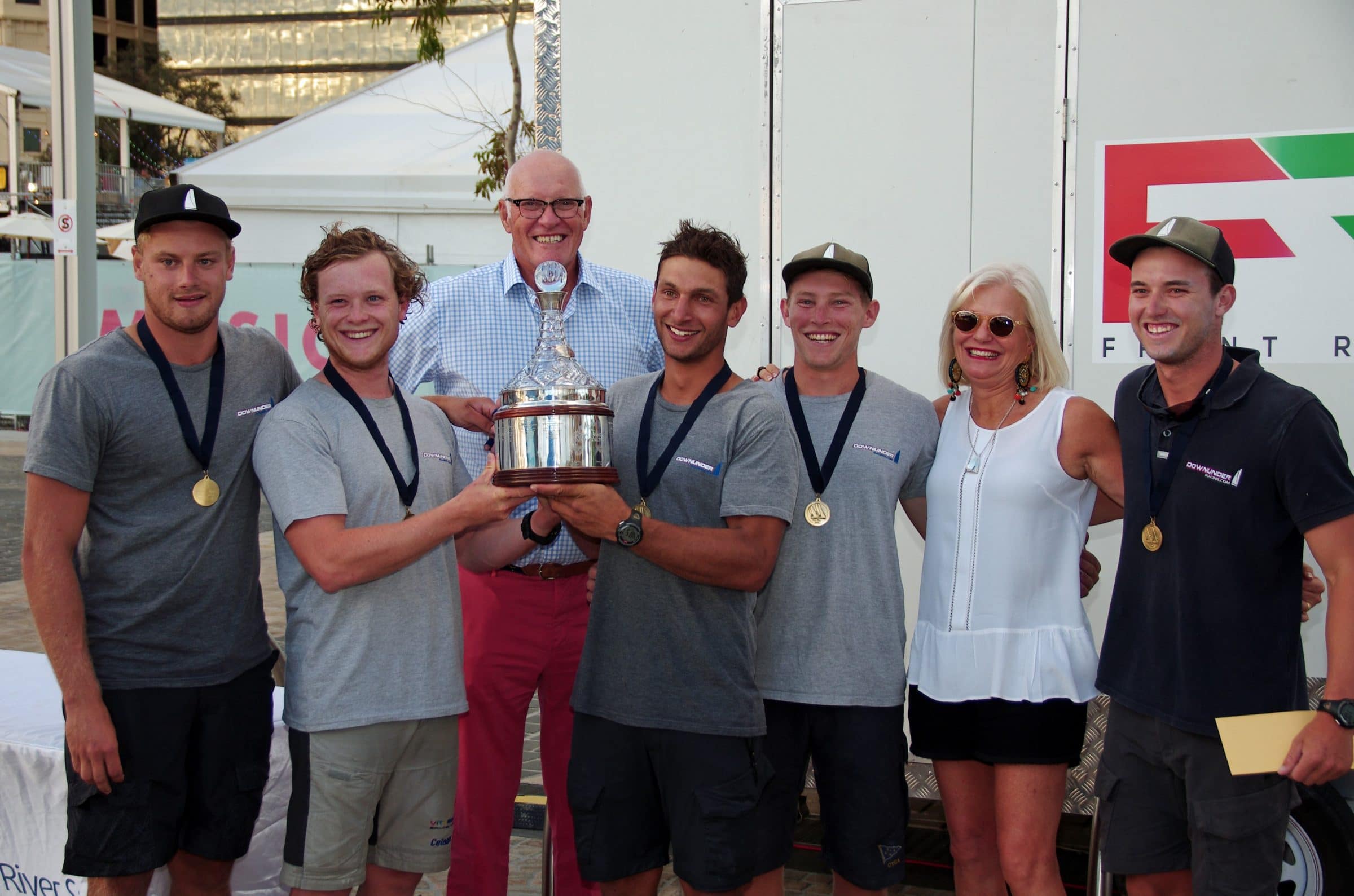 A huge thanks from organisers, Swan River Sailing, to everyone involved! Sponsors, Volunteers, On-Water Team, Umpires, Yacht Clubs (Especially host club Royal Freshwater Bay),
Competitors, Suppliers, Friends, Families…. EVERYONE! This event would not be what it is without each and everyone one of you! Bring on #WarrenJones2019