The City of Perth Festival of Sail kicked off on the weekend with two days of FREE ‘Discover Sailing’ & ‘TACKERS!’ from Elizabeth Quay. The combined efforts of Royal Freshwater Bay Yacht Club and Swan River Sailing who put these two days together meant that over SIX HUNDRED members of the public got to try the sport of sailing in a safe and fun environment! 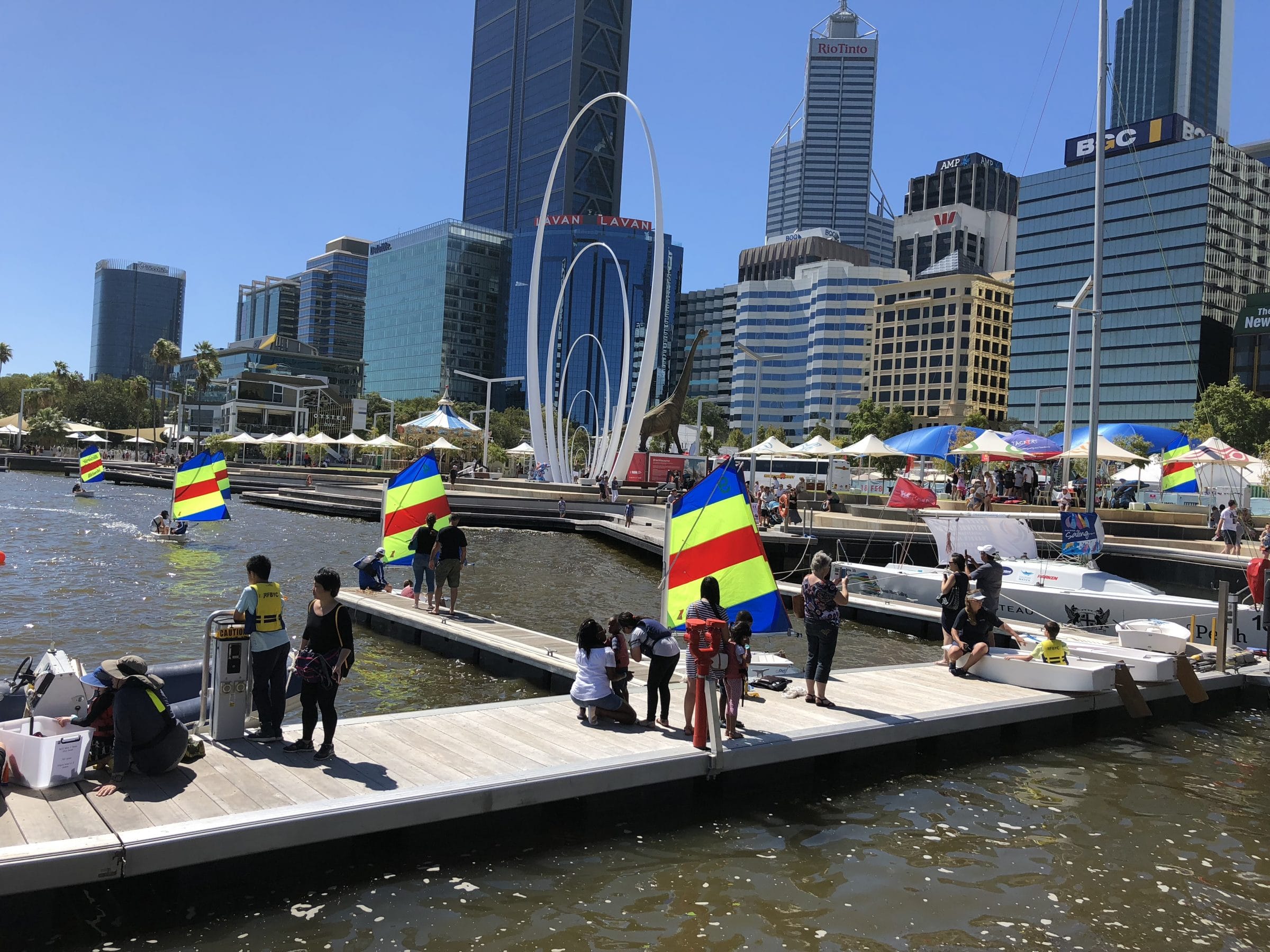 The Warren Jones International Youth Regatta, the marquee event of the City of Perth Festival of Sail, began on Monday with a gusty E/SE breeze and a very tight racetrack.

Twelve youth teams had to negotiate a number of obstacles around the course including ferries, barges, sand banks, mooring buoys and each other! There were plenty of umpire calls as teams used the boundaries and race management boats to their advantage.

The two teams that did come out best on day one of the Round Robins were returning to compete in Perth for a second time. Harry Price and his Downunder Racing team from the Cruising Yacht Club of Australia in Sydney, was the highest ranked skipper coming in to this regatta, and polished off four wins with no losses. Will Boulden and his Alpha Racing Team, from local host club Royal Freshwater Bay Yacht Club, also finished with a clean sheet of four wins and no losses.

Gusty testing conditions were tough for some of the younger, smaller teams.

After the day’s racing, teams took part in the Sponsor’s Pro Am race on the same short windward/leeward course. The match race teams were joined by sponsors, stakeholders, invited guests, some recent Americas Cup sailors and local high profile sailing names for a bit of fun. 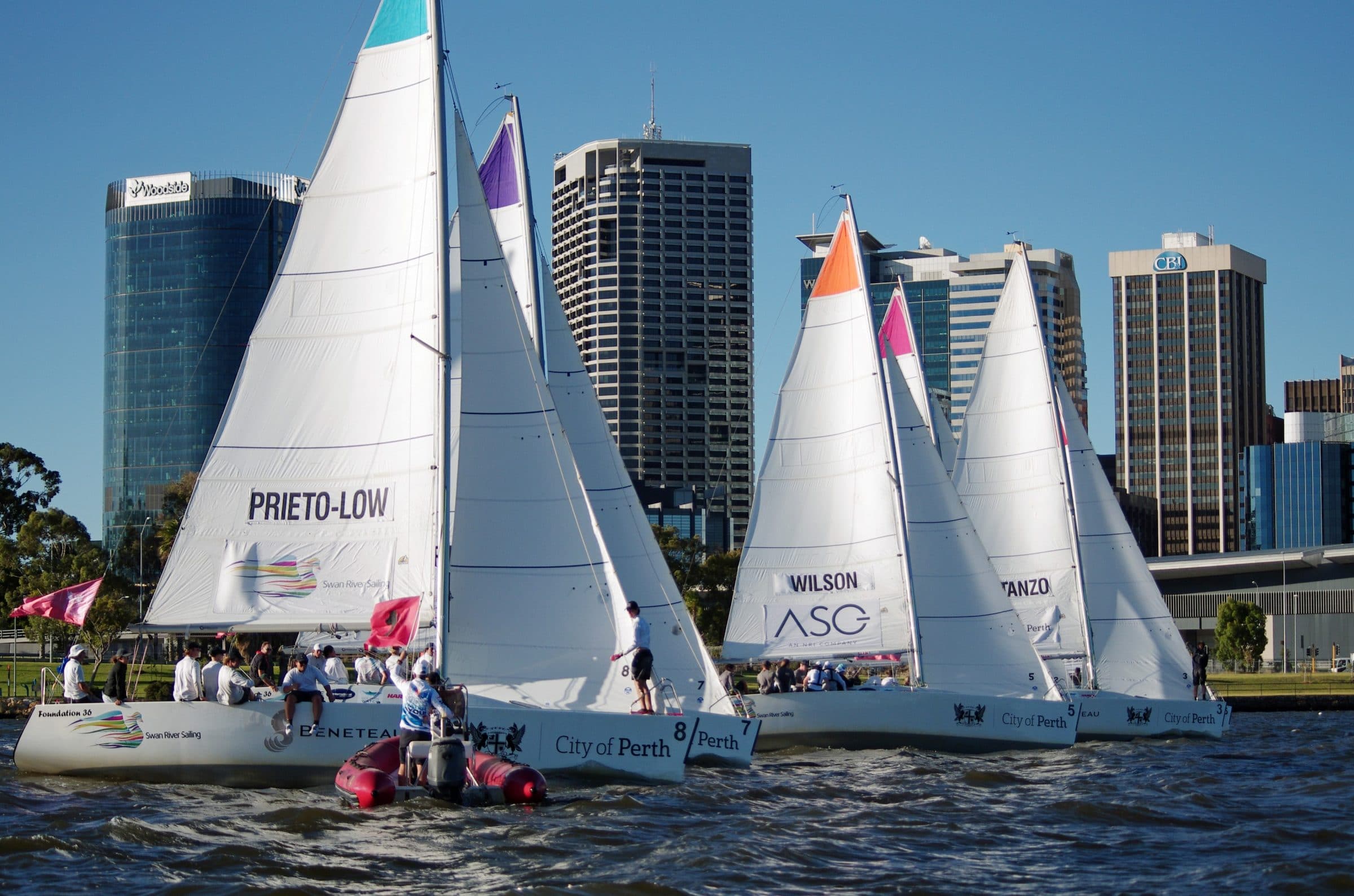 The morning of Day Two of the City of Perth Festival of Sail started off with seventy-five women from corporate Perth heading to the Lucky Shag to hear speeches from the Lord Mayor of the City of Perth, Lisa Scaffidi, and Warren Jones Regatta skipper, Clare Costanzo who was joined by her crew member, Jess Angus.

The speeches had a ‘women in leadership’ theme and Clare shared her experiences on how the sport of sailing also helps her off the water. The guests then split into teams, hosted by some high profile skippers and local yachtswomen, and went out on the water for a taste of the sport. The guests and hosts all finished the morning back at the Lucky Shag with some morning tea and networking.
This event, ‘Women On Water’, was a completely non-profit venture by Swan River Sailing & Royal Freshwater Bay Yacht Club – all in the name of introducing more women to the sport of sailing and encouraging them in their leadership goals and other aspects of their lives.

Day two of the Warren Jones International Youth Regatta kicked off in the afternoon.

It was another tricky day on Perth Waters as an Easterly settled in early in the day meaning a very short and enclosed racetrack. Although the wind ebbed and flowed between thirteen and seventeen knots, there were occasional gusts of nineteen to really test the boat handling skills of the young crews.

Will Boulden finished top at the end of Round Robin One – winning ten matches of eleven; his only loss going to Team Dutch Wave, skippered by Jelmer Van Beek, who have come all the way from the Netherlands. Pushing Will all the way was Harry Price who won nine of his eleven matches with his only losses going to Boulden and another local sailor, Ethan Prieto-Low and his team, ‘Calypso Racing’, from Royal Freshwater Bay Yacht Club. Price’s boat handling skills are slick but a little too much aggression cost him a half-point deduction in an altercation with young gun Marcello Torre.

Jelmer van Beek and his Team Dutch Wave remain the leading international team with some very close matches. Van Beek finished Round Robin One with eight wins and three losses. The battle between the three kiwi teams intensified today; George Anyon dropped a few to finish with five wins but the other two teams from the Royal New Zealand Yacht Squadron Performance Programme had a better day. Skippers, James Wilson and Nick Egnot-Johnson worked hard to take a few good scalps and all three kiwi teams remain mid table going in to Round Robin Two.

Mark Spearman from Royal Freshwater Bay Yacht Club acted as a late entry in the regatta and looks to be getting used to the Foundation 36 yachts – good teamwork by his crew is starting to show. The youngest skipper in the regatta, Marcello Torre, had some very close matches today, the highlight being a win against the much more experienced George Anyon.

There were a lot of boats going aground all around the edges of the course until the tide came in around lunchtime keeping the maintenance teams very busy with tow ropes.

Racing continues on Wednesday, day three, of the City of Perth Festival of Sail, with Round Robin Two and a similar forecast. Sailors and volunteers will then retire to the Royal Freshwater Bay Yacht Club for a Barbeque and watch the full blood, blue moon set over the City of Perth skyline, whilst the event sponsors and other iconic Perth businesses will take to the Perth Waters and battle it out for the title of the 2018 Corporate Cup. 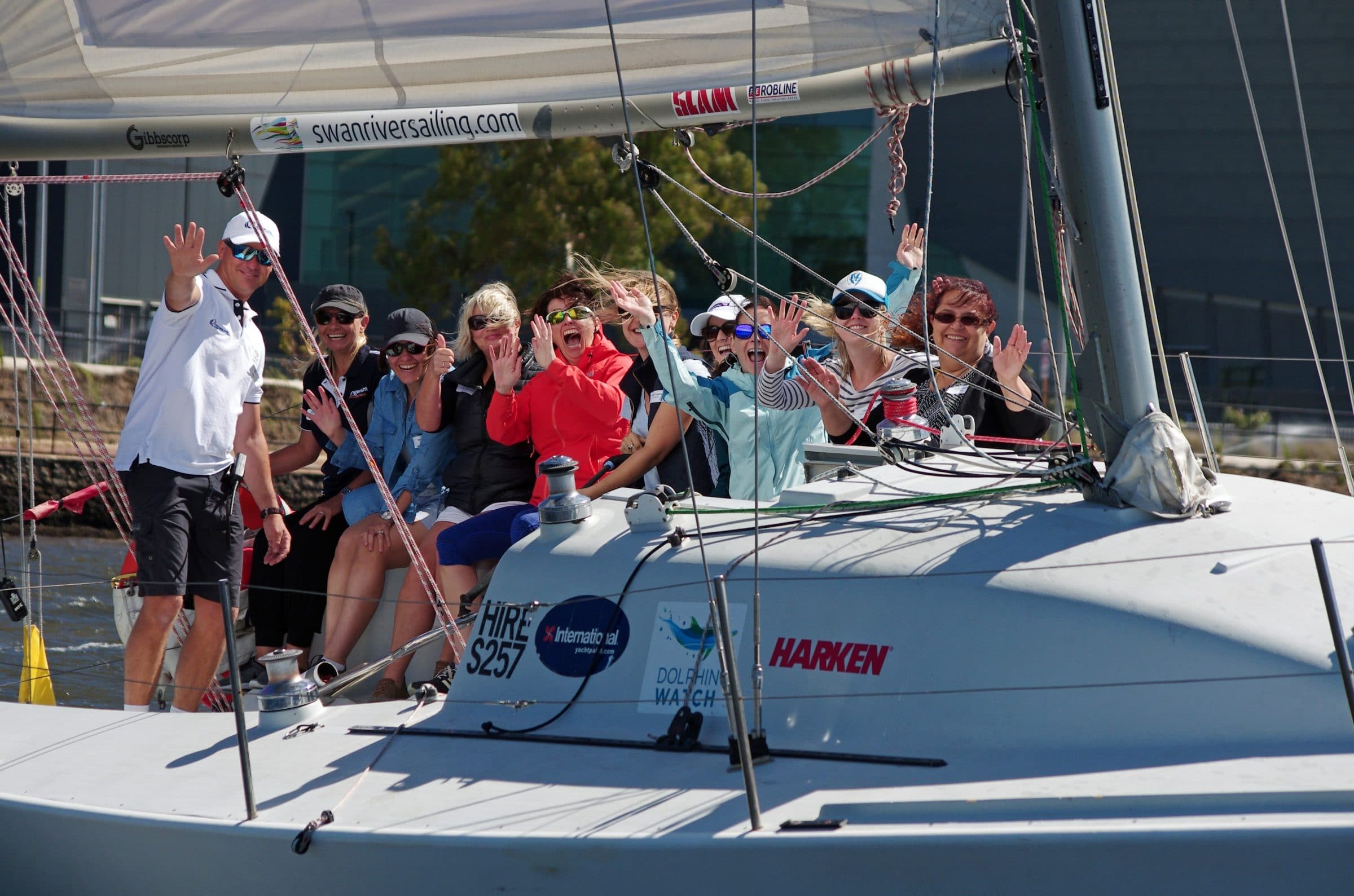